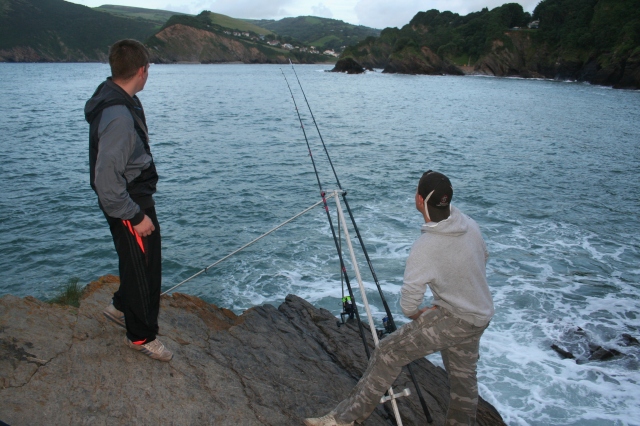 This evenings fishing was not about searching for specimen fish just going fishing with my son James and his mate in the hope of catching a few fish and sharing my enthusiasm at an old favourite mark.
The well trodden path down the wooded Cliff side proved an adventure for James and Richard who were wondering where it would lead. Eventually the path came out into the open to reveal North Devon’s hills and bays illuminated by the late evening sunshine. The tide was flooding in and was now half-tide. With high tide at 10.00pm the last hour would be fished in darkness and it was the last two hours of the session that I expected to bring results.
The water clarity was good and took on that aqua shade of turquoise so often enjoyed through summertime. A powerful brooding groundswell pushed in surging against the rocks; exhilarating but slightly unnerving despite years of fishing the mark without incident. I savored familiar sites of my home coast with contentment.
We all tackled up excitedly with me suggesting two hook rigs for the lads in the hope of at least catching something small. I tied on a pulley rig and a strip of mackerel launching it out to sea to see what came along.
The next hour passed pleasingly with Richards’s rod tip constantly rattling as small fish nibbled on the baits. Eventually a small pouting succumbed to bring a broad smile to his face.

As the light faded I whipped a sizeable chunk of spider crab to my hooks and recast hoping for a bass or smoothound. A few rattles on the rod showed that something was taking an interest and on retrieving the bait I found it has been well chewed. A while later whilst watching James and Richards rod tips a rasping ratchet calls out and my rod but lifts up striking James on the leg. I grab the rod but whatever had hit the bait is well gone. I curse loudly knowing I have probably missed the fish of the night.
With darkness descending its big baits all-round now. A sandeel and squid cocktail soon brings a decisive indication to James rod tip and a protesting fish is on its way to the shoreline. I grab the net and approach the waters edge scooping a pleasing 4lb bass from the water; its smiles all-round now as James holds aloft his silver prize proudly for the camera. 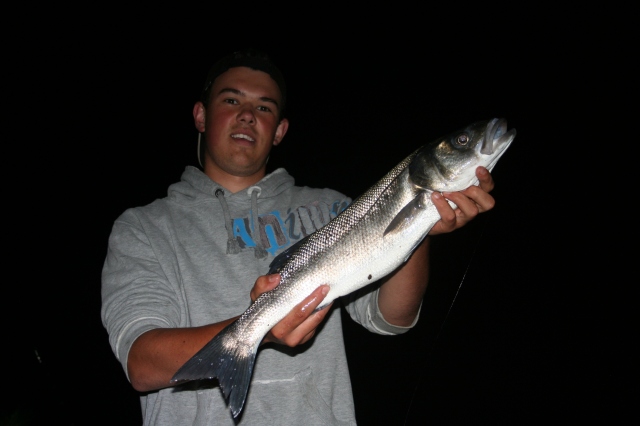 The next couple of hours pass all too quickly with just a couple of dogfish succumbing to our baits. As is often the case as high water arrives there is a lull in activity. If we stayed on bites would probably come but with time approaching 11.00pm its time to trudge back up the path to the car.

The two youngsters plough on up the steep path without stopping for a breather as I follow on well aware that they have 30 years of youth on their side.