The line was flicked out across the mirror calm surface and the bead headed Montana Nymph allowed to sink before starting to retrieve with short pulls. After fifteen minutes or so without a take I decided to change the fly and put on an olive damsel nymph. This was cast out and allowed to sink to the extent of the leader before again commencing a teasing retrieve.
Noticing more activity further down the lake I moved to a fresh vantage point. The line was extended across the water again and the damsel nymph allowed to sink again. As the nymph came in to view the shadow of a trout materialized from the depths and merged with the lure in that marvellous moment of deception. The line tightened the rod hooped over, the trout surged to and fro pulling against the light rod.
Another trout soon followed completing the brace I needed for the Wistlandpound Flyfishing clubs winter challenge match.

Chatting to fellow club members it appeared that several patterns had worked on the trout. Over the years I have used many flies and my favourites change over the years. Thirty odd years ago I would have tied on a Sweeney todd, this changed over to a viva, now I tend to tie on a damsel nymph. As to nymphs Montana and pheasant tails are my favourites. The trout are of course oblivious to the changing trends that us anglers follow and would eagerly devour many different offerings. Size, colour and texture are all attributes that matter and the way the fly is presented are all part of the equation.
I resumed fishing after weighing in my brace of trout and enjoyed an hour of fascinating fishing. Ice formed in the rod rings, flurries of snow descended. I twitched the damsel back visualizing the marabou tail shimmering attractively in the dark clear water. Polarized glasses enabled an occasional glimpse of the trout beneath the surface. From time to time came the thrilling tell tale tightening of the line as a trout nipped at the lure.
When the hook finally found a grip I was ready to return home with three tasty rainbows and memories of icy rings with mirrored images on cold winter water. 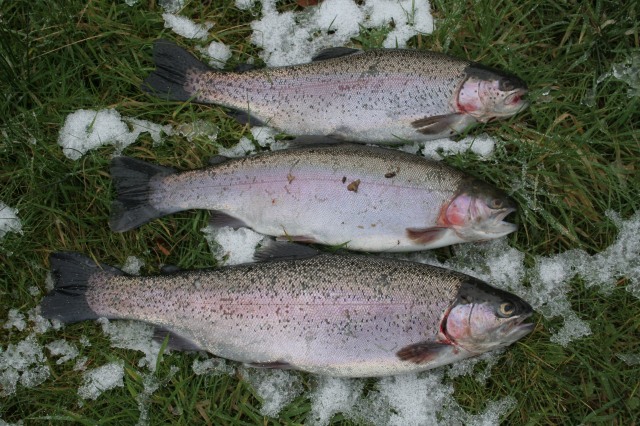 1 Response to Deception in cold waters