It all seemed a bit of a rush sorting this and that, loading the car grabbing a coffee, making a minor detour to drop off a wedding invite for a friend and then realizing the road would be closed so a detour was required. It shouldn’t be like this; I was a bit stressy. The clocks had changed the night before so I should have had an extra hour in bed. Perhaps this was why I made myself late?
The trees had started to turn bronze and gold in the morning light, mist rising from the damp soil. I rounded a bend in the road and from my right bounded a hind, two more followed striding nonchalantly across the road as if on zebra crossing.
The stress began to evaporate and I was soon pulling into the car park at Blakewell Fishery it was full of anglers eagerly threading lines through rod rings and selecting their starting fly for the day.
It was the fisheries autumn competition and after a difficult season of high temperatures and weed, winter and autumn fishing promised a boost in sport and anglers through the gate.
We were greeted by John and Richard Nickell and enjoyed a couple of cups of freshly brewed coffee before the all-important draw. Friendships were rekindled fishing stories exchanged and absenteeism’s noted with the appropriate concerns expressed.
Fishing was due to start at 09:15 and as is often the case action was almost instant. It was great to cast the line across the water, watch the tip settle, begin the retrieve and then feel that delightful tightening of the line and visible draw of the lines tip in the dark waters. The rod was raised and the surface erupted in a fury of spray as the unsuspecting rainbow shook its head before putting distance between itself and the force that pulled from that dimension outside off its world. 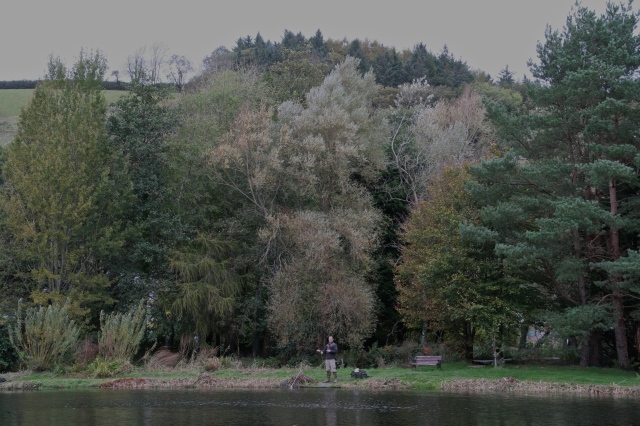 Around the fishery rods bent as fish succumbed to various creations tied to create an illusion of living food. We had an hour in each swim but by 9.45 I had three trout of over four pound apiece. It was time to put down the rod and take in the scenery. 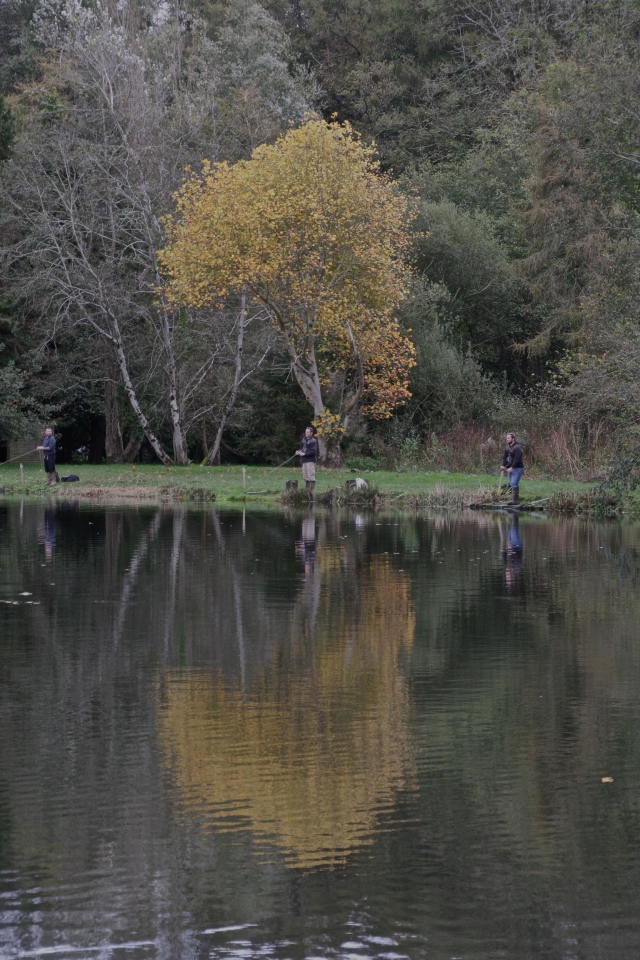 I had one more fish to catch in the morning session and achieved this after five minutes at my next peg another quality rainbow of over fours pounds. For the next couple of hours I wondered around chatting to anglers and taking pictures. A stroll to the fishery shop and a long chat with Richard about fishing, places to fish and fishery politics. The barbecue was welcome when it came, burgers, sausages, sauces and salad with fresh bread baps and rolls. All washed down with coffee or a beer. Plenty of banter and fishy tales for an hour as the fishery and it fish took a rest from a bombardment of flies and lines.

Two fish to catch in the afternoon session and a far more difficult task than in the morning when the fish are naive and eager. Luck was on my side today though and as I looked into the water I saw a decent trout a couple of rod lengths out. I ensured that m damsel nymph was wet and ready to sink. Flicked it a foot in front of the trout and twitched it. The response was instant and trout number five was in the bag.
The next forty-five minutes saw no more chances. All around the lake the trout had switched off. Bent rods were few and far between. My next peg was in the corner of the bay where good trout could be seen swimming slowly or basking. Cast after cast brought only the occasional follow.
Observation showed that some trout were more active than others and a careful flick dropped the damsel in front of good-sized rainbow. The fly was twitched and watched the trout mouth open. To my surprise there was no contact when I lifted the rod. The trout was undoubtedly in a heightened state of awareness and on my second attempt sucked the fly into its mouth. There came that delightful moment when the line tightened and rod bent over. Every moment of the trout’s deception visible in the clear water; the shaking head, the acceleration as it powered away to be turned by the flexing rod. 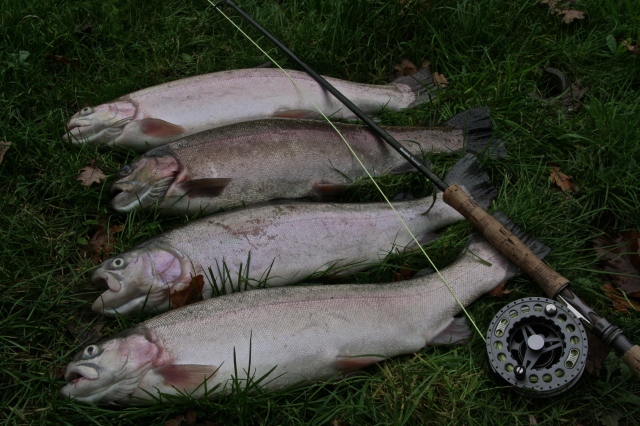 It had been a good day a full bag of six trout weighing 27lb 11oz, enough as it turned out to win the days competition. Not everyone had caught though a couple of anglers had blanked as we all do on occasions. Here is the great dilemma for the trout fishery owner. Put in too may trout and its perceived as too easy. Lower stock density and some will complain it’s too hard. On a day like this there can be no complaints; some have limits some have empty bags all down to many factors, that’s fishing.

An all-round angler I fish for fun and enjoy sharing my experiences and adventures at the waters edge. Each week I write a column for the North Devon Journal and occasional articles for various publications.
View all posts by piscator2 →
This entry was posted in Uncategorized and tagged autumn trout, blakewell fishery, rainbow trout, Trout competition. Bookmark the permalink.

1 Response to A WINNING BAG