Winter is prime time for the sea angler anchoring big baits out in the dark waters. Its not always appealing as wind drives the rain and spray testing the waterproofs. A warm fireside is the sensible place to locate; yet there is something about braving the elements; standing up to what nature sends. At this time of year there is always the chance of that big fish that makes it all worthwhile.

My last three trips have brought some success. A calm cold and frosty night before Christmas saw Rob Sciones and I fishing a deep-water rock mark. It was one of those perfect winter nights the air still, the breath drifting in the crisp cold air. Stars flickered in the dark sky and the lights of Wales lined the horizon twenty odd miles across the dark waters of the Channel.

First cast brought a savage rattle on the rod tip. The result was a pleasant surprise ling of 3lb 10oz. Next cast and another rattle on the rod tip; a rockling I thought and picked up the rod after a few minutes. The fish that pulled back was no rockling; close to the surface all went light and I swung up a rockling the gash in its side telling a story.

The unfortunate rockling went back out on a big hook and fifteen minutes later something swam off with it and the 6/0 Sakuma hook. It felt a decent eel but came off half way in.
A smaller eel followed of around 8lb along with a few dogs. 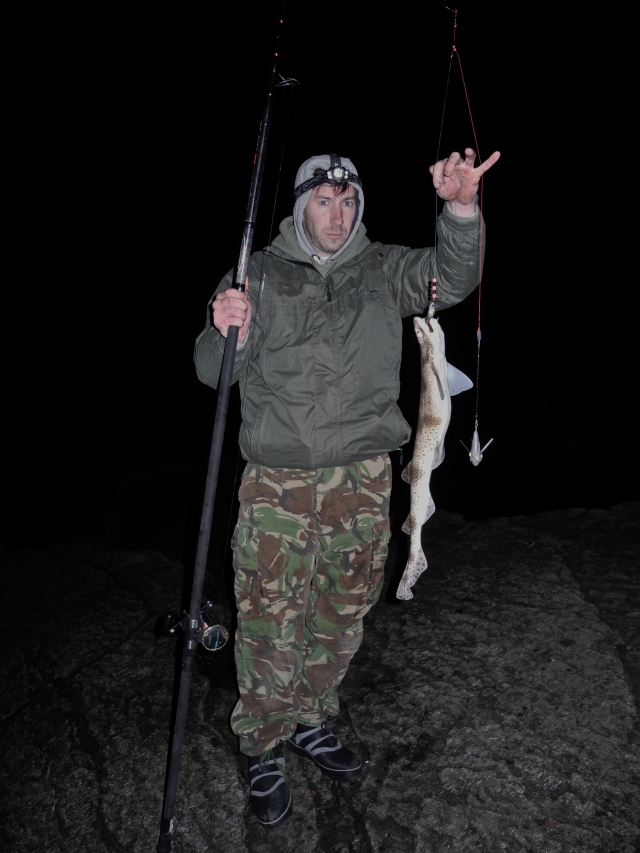 Next trip was on New Years Day; wind pushing gale force from the South West, Kevin and I on a short trip over Low water, driving rain. Out went the baits large sandeels wrapped in squid, wire traces just in case. Kevin’s first into action a decent fish on the line, persuaded to the rocky shoreline. The tense wait to see what has been hooked the headlights pick out a thrashing on the surface. The shark like shape of a spurdog, I grab the trace and lift a heavy specimen ashore. The scales give a number of 10lb 15oz; the camera captures the image.
I glance over to my rod; its not there I rush over to discover that the wind has toppled the rod rest. I pick up the rod and there is something transmitting a pull through the line to the rods tip. I lift the rod and feel that delightful feeling of life on the end of the line. Kevin lifts a heavy spurdog from the surging water for me. At 11lb 11oz it’s a new PB and a great start to the year. Its handshakes and smiles; the rest of session sees one more spur to Kevin and a succession of dogfish. The saying being there at the right time springs to mind, one cast each put baits amongst a feeding pack, then their gone.

Next trip and its an after work session grabbed in a slight lull in the weather. Its raining hard and windy but it’s the best its likely to be for a few days. Rob joins me on the rock and we launch our baits into the night. A couple of dogfish start my evening then I spot a better indication. The line falls slack as I pick up he rod. The fish pulls hard no doggie this time. The headlight beams search the water. Rob takes the gaff as close to water as is considered safe. It’s a ray he exclaims. The steel of the gaff is driven into the wing and the ray is hauled ashore. A blonde of 7lb 1oz is no specimen but it’s a pleasing site and well worth venturing out for. A couple of casts later the rod is bent again and this time it’s a big fish. The line cuts deep and I have that vain hope that it’s a big cod. Then up pops the serpent like head of a good sized eel. A few minutes later I am struggling to hold it aloft for the camera; it’s a powerful creature and pulls the scales to 22lb 10oz; the heavy-duty sack weighs 5oz so its 22lb 5oz of specimen eel.

I really want Rob to hook his own monster but his luck is not in tonight and its just dogfish that locate his baits. Next time with luck I will yield the gaff or net.