Exmoor’s undulating hills and valleys unraveled as I drove a winding road en-route to a day on the water. I have visited Wimbleball Reservoir on several occasions over the years but not frequently enough to know the way with any degree of confidence. At close to 400acres it is surprising how close one gets before the glistening water is revealed.
I was greeted on arrival by enthusiastic South West Lakes Trust Ranger Danny Ford who planted a hot coffee in my hand and pointed out the areas of the lake he felt would be most likely to produce. The plan was for me to spend the morning fishing alone on a boat and for Danny to join me in the early afternoon after he had participated in a competition with Wimbleball Fly Fishers.
The boat proved to be a very stable one powered by a petrol outboard motor that made getting around effortless compared to the tedium of rowing.
With a strong North Wind blowing down the lake I headed for the opposite shoreline where there was a degree of shelter in the lee of the bank. On a cold sunny day I expected the trout to be deep and started off with a fast sinking line. To the point I tied a black and silver humungous. Strange how ones go to fly changes from season to season. This is a lure I have seldom used in the past but after success at Wistlandpound earlier in the season I was confident in its attractive qualities. In truth a wide range of lures will work early in the season with key points being weighted eyes to sink the lure quickly, a dark body with a bit of flash to attract and that marabou tail that exudes a lifelike alluring wriggle to entice the aggressive rainbows.
Dog nobbler’s, black tadpoles and damsel nymphs all have these features and all work equally as well on their day.
Shortly after dropping anchor I noticed several trout rising on the edge of the ripple. I had already set up a second rod with a team of buzzers attached and put these across the area of rising fish. To my surprise there were no takers and the rise was over all too soon.
It was a splendid April day with a blue sky and high white cumulous clouds drifting above Exmoor’s hills of heath and woodland. Hundreds of martins and swallows gyrated above the sparkling water feasting on hatching insects. It was a great day to be on the water but of course I was fully focused upon that connection with a life I could not see beneath the water.
The lure was once again sent out to search deep down. An erratic retrieve bought that pleasing electrifying jolt through the line. The rod pulsed and a rainbow trout surged to and fro leaping from the water to leave a pleasing image etched upon the minds eye.
The next couple of hours saw four more rainbows to 3lb brought to the side of the boat and released with a twist of the hook. 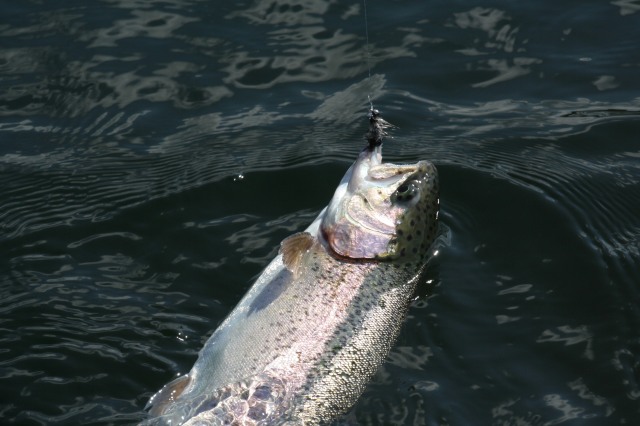 A call from Danny on the radio and I returned to the pontoon where I enjoyed a snack before heading out once again with Danny to lead the way. We headed down to the Upton Arm and fished close to the bank sheltered from the cold wind. Trees reached right down to the waters edge some of them showing the green shoots of early spring. Birdsong resonated all around and it was not long before our rods where hooped over as a succession of rainbows seized our lures.

I took the opportunity to capture some images of pristine rainbows glinting in the afternoon sunshine with full tails and silver and rainbow hued flanks. When sport tailed off we motored across to the far bank where the wind was pushing in. The rods were soon pulsing again and that delightful surge of life was felt through the line as the trout hit the lures with aggressive intent.

I have always loved the simplicity of early season trout that tug on the line as the lure is attacked. Later in the spring and summer as the water warms there will come the subtle pleasures of deception near the waters surface and the thrill of the rise. But I will always relish the freshness of springtime trout fishing.
At the close of the day of the day we had caught and released over twenty trout a great days sport in magnificent surroundings. 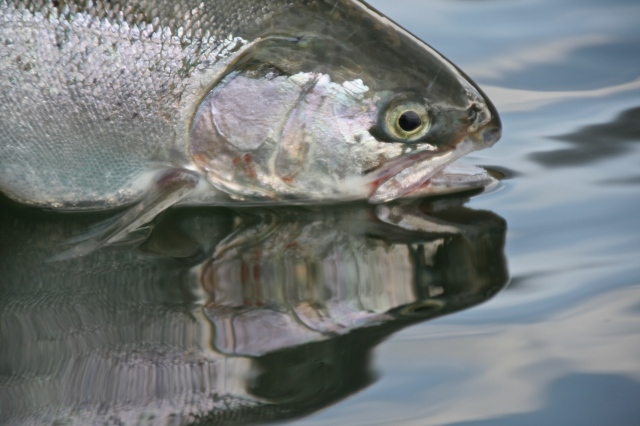 An all-round angler I fish for fun and enjoy sharing my experiences and adventures at the waters edge. Each week I write a column for the North Devon Journal and occasional articles for various publications.
View all posts by piscator2 →
This entry was posted in Uncategorized and tagged Exmoor, rainbow trout, South West Lakes, Wimbleball. Bookmark the permalink.