Combe Martin SAC’s annual spring boat trip off Minehead is always anticipated keenly as it has produced some fine sport over the years. As always it’s scary how the time flies past each year and it’s once again time to clamber aboard Steve Webber’s Osprey.
With fine weather forecast I have packed the sun cream and the waterproofs. Just as well as it’s raining as we steam out of Minehead Harbour forging across a calm Bristol Channel to a mark off Blue Anchor.
Out go the baits and on goes the kettle. Banter flows among a familiar gang of anglers. First into a decent fish is Ian Laird who brings a thornback of around 7lb aboard. For the next hour there is steady stream of dogfish and a solitary smoothound.

As always this far up channel the water is thick and murky with nil visibility into the water.
As the tide begins to ease Steve suggest we wind them up and move to the next mark a series of banks off Minehead where we have enjoyed some fine sport in previous sessions. Down go fresh helpings of sandeel, squid, herring, mackerel and crab. Over the next three or four hours it’s steady sport with the busiest period as predicted close to slack water. Strangely we only land a couple of small eyed ray with thornbacks dominating catches with fish to over 8lb putting a pleasing bend in the rods.

Those who persisted with crab baits  also landed several smoothound the best just over 9lb to the rod of John Shapland. The weather improved as the day went on and by mid afternoon it was warm and sunny.

As the tide pull increased on the flooding tide the fish stopped feeding and it was time to contemplate a move. After discussion with Skipper Steve we decided upon a move back up off Blue Anchor where we hope for a big hound.
After a quiet start we started to get a few fish on board with a few more thornback and one or two more ray. With the day ebbing away Matt Jeffery started to collect the pool monies for the days biggest fish. At that moment I was leading with a ray of 8lb 5oz. But Matt’s early collection of money collecting proved premature when Dan Spearman landed a ray of 8lb 6oz! Moments later Chay Boggis landed a thornback of around 7lb providing the opportunity for a pleasing brace shot. 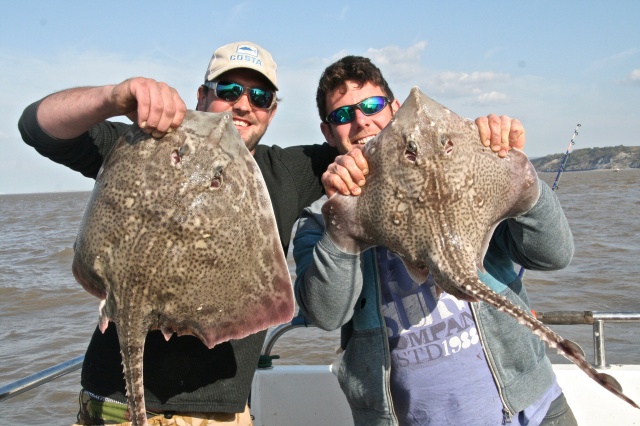 A few minutes later my rod tip pulls over and I hook what at first feels like a dogfish. As the fish comes closer however it obvious that its no dogfish. The rod bends and I even have to give a bit of line when the fish is near the boat. At 11lb 13oz the thornback is clear winner of fish of the day and pays for the days boat trip!

A good days fishing with around twenty ray boated and several smoothound. The noticeable thing about todays trip compared to previous spring boat trips was the large proportion of thornback ray. On previous trips at this time of year we have landed over fifty ray with small-eyed ray , spotted ray and blonde ray dominating catches. Was this a result of ray populations or an east wind?

An all-round angler I fish for fun and enjoy sharing my experiences and adventures at the waters edge. Each week I write a column for the North Devon Journal and occasional articles for various publications.
View all posts by piscator2 →
This entry was posted in Uncategorized and tagged Bristol Channel fishing, Minehead boats, Osprey, Steve Webber, thornback ray. Bookmark the permalink.