The Wye valley in late May early June is a landscape of near perfection with the greens of early summer so vivid and fresh.

I had secured 2 days salmon fishing with accommodation via a blind auction at the River Taw Fishery Associations AGM earler in the year and arrived at the end of May with encouraging prospects following a slight rise in river levels after weeks of dry weather. We had invited our son James and his partner Sophie to join us at this secluded Riverside Retreat beside the river. On arrival we were given a cordial welcome by Tony the ghillie. Within a few minutes the formalities were interrupted by an urgent call! One of the rods had  hooked a salmon. James, Sophie and I jumped into the Range Rover leaving my wife Pauline to unpack whilst we were taken on an exhilarating ride along the riverside fields to find an angler enjoying battle with a fine Wye salmon. 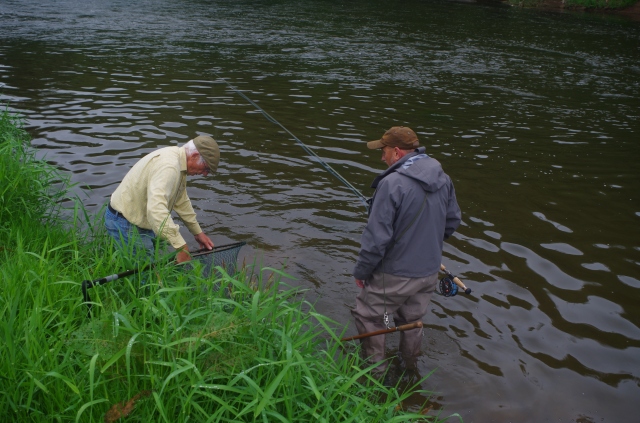 The battle was almost over by the time we arrived and Tony wielded the landing net with precision to secure the prize for Gerry. The salmon looked huge and there was a sense of joy and achievement that we all savored and were thrilled to  share. The weigh net revealed a weight of 18lb. The salmon was held carefully in the river and lifted momentarily for a couple of quick pictures before it swam strongly away to continue its journey up the majestic River Wye.

To see such a fine fish was certainly inspiring but a comment that an angler spends an average of 250 hours fishing per Wye salmon puts the fishing into perspective and is an illustration of the achievement and of the sad decline in salmon numbers in recent times. Of course success can come at any time and if the fly or lure is in the right place at the right time then success can come as we saw.

It was now time to head back grab a snack and a drink before commencing upon our own fishing adventure. The River Wye glided past as we savoured the scene. Swans glided gracefully across the water, ducks upended foraging for food. The occasional fish broke the surface as mayflies hatched here and there. The quiet flowing river was a scene we would savour over the next couple of days to catch a fish would be a bonus.

Tony told us that several shad had been caught recently and whilst these are a protected species it was likely that they would intercept a fly or spinner intended for salmon. As I had never caught a shad I was  delighted when within just a few minutes I had caught and returned one of these hard fighting fish. 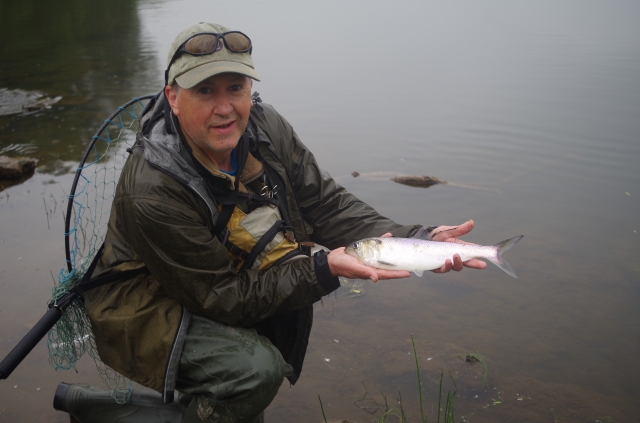 These handsome looking fish closely resemble herring with their silver sides and glittering scales. They are sometimes referred to as Mayfish because they migrate into freshwater to spawn in late May and early June. They are considered rare now but this certainly did not seem to be the case as James and I must have caught  close to thirty during the two day stay on the river. For their size they give a spirited account frequently leaping from the water and shaking their heads like miniature tarpon . The fish are now only regularly caught from three Rivers in the UK. The Wye, Usk and the Severn. I have heard accounts of these fish being seen and occasionally caught from the Taw and other Devon Rivers and know of the occasional one caught in nets in the local estuaries. These migratory species are a fascinating part of our rivers wildlife and increasingly vulnerable to a wide range of factors. Salmon, sea trout, shad, lamprey, silver eels and sturgeon are all part of that group of fish that live parts of their lives in the contrasting worlds of salt and freshwater. Like the swallows and martins that swoop over the river there delicate lives are a wonder of the world that should be appreciated.

James with a shad

And so our adventure on the river began over two days wondering the river bank rod in hand punctuated by meals on the porch over looking the river with the regal swans arrogantly dominating the scene. Ducklings dashed to and fro grabbing hatching flies. The occasional fish broke the surface to suck in a mayfly. The river banks were decorated in the glorious colours of wild flowers.

Wild flowers of the river bank

Tony the ghillie gave valuable advice and many words of wisdom as he told of taking lies and many were illustrated with an intriguing tale of a big fish taken from the spot. His enthusiasm and love for the river was inspiring and I feel sure this has helped many visitors to the river live out their dreams. A river has many tales to tell with many anglers wandering its banks over the decades. The river here has produced some magnificent salmon over the years with twenty-pounder’s relatively common and thirty pound fish a possibility. There is also a healthy population of barbel, big chub, perch and pike to over thirty pounds. 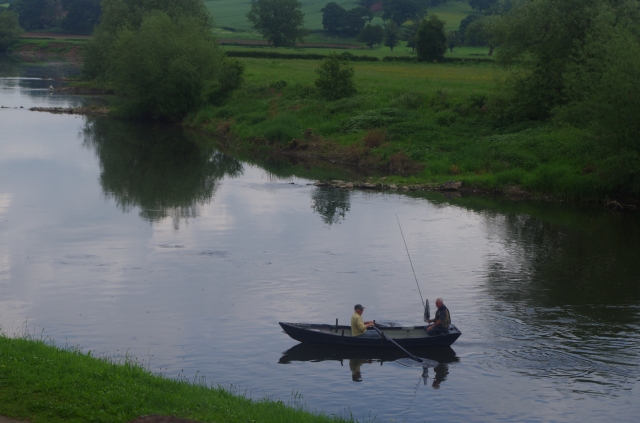 Tony ferry’s an angler to the far bank

A thundery evening in the vale

Throughout much of our stay the river valley was shrouded in mist with light rain and drizzle. On the second night a thunderstorm drifted in across the vale giving an awesome display of natures power. This was an ideal time to visit the local pub for a delicious meal.

Reading the water is a vital part of river fishing and I was pleased that many lies I identified were confirmed as good spots by Tony. The river is far from completely natural as many croys have been built to create taking spots and give anglers a casting platform. Huge boulders have been carefully placed to create lies for resting salmon and the banks have been strengthened and walkways built to make the anglers task a little easier. One valuable piece of advice I took away was to fish the water close to the bank first before extending the line across the water. I realise that all too often I cast my line across the river and may on occasion miss the water at my feet. The Wye is of course a much bigger river than the Devon rivers that I am used to and if I had to draw comparisons I would liken the Wye to the Taw with its sedate pace and waving strands of weed. I fished the fly using my switch rod and managed to cover most of the river with a degree of competence. Though the ability to Spey cast well would have been a distinct advantage. I also covered the river with a Flying “C” which seemed rather strange to be able to cast a spinner and feel that throbbing of the blade as it searched the water to entice the resting salmon. Spinning is rightly restricted on many rivers depriving the anglers of a useful tool in the search for salmon.

As I cast my spinner across a particularly good looking stretch of river I felt a gentle tug on the line as something touched the spinner. Moments later a gleaming bar of silver erupted from the water giving me a glimpse of the rivers treasure that will live in my minds eye till my dying day. I leave you with a few views of the river on the morning of our departure as the jogger passing by commented “close to heaven isn’t it?”. 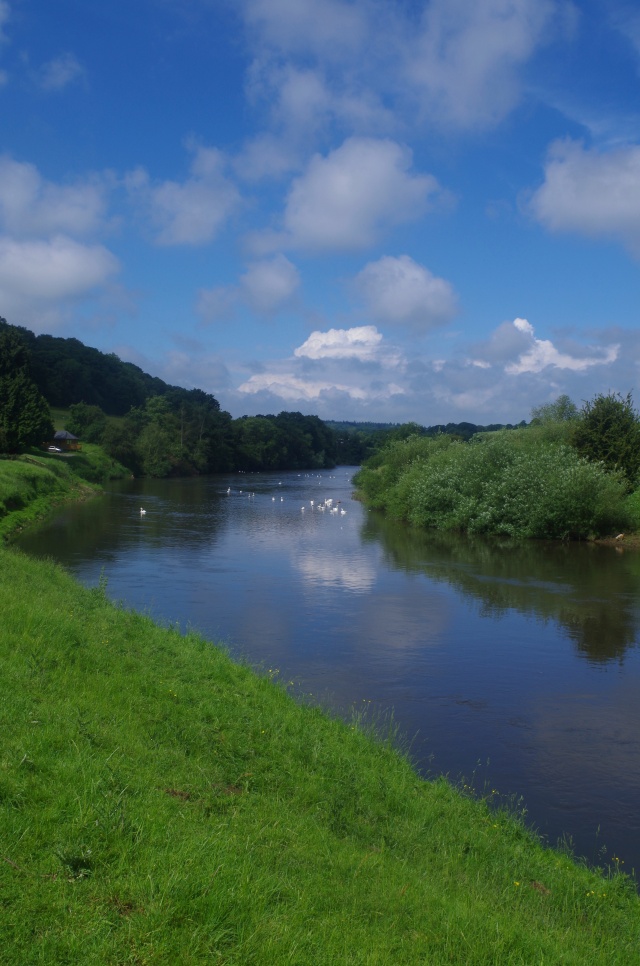 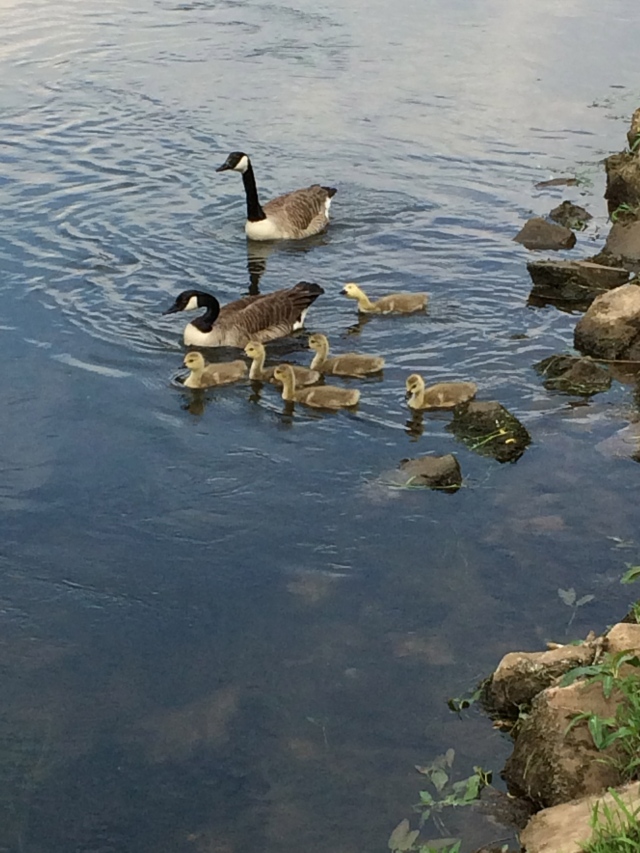 An all-round angler I fish for fun and enjoy sharing my experiences and adventures at the waters edge. Each week I write a column for the North Devon Journal and occasional articles for various publications.
View all posts by piscator2 →
This entry was posted in Uncategorized and tagged River Wye, Salmon, Shad. Bookmark the permalink.